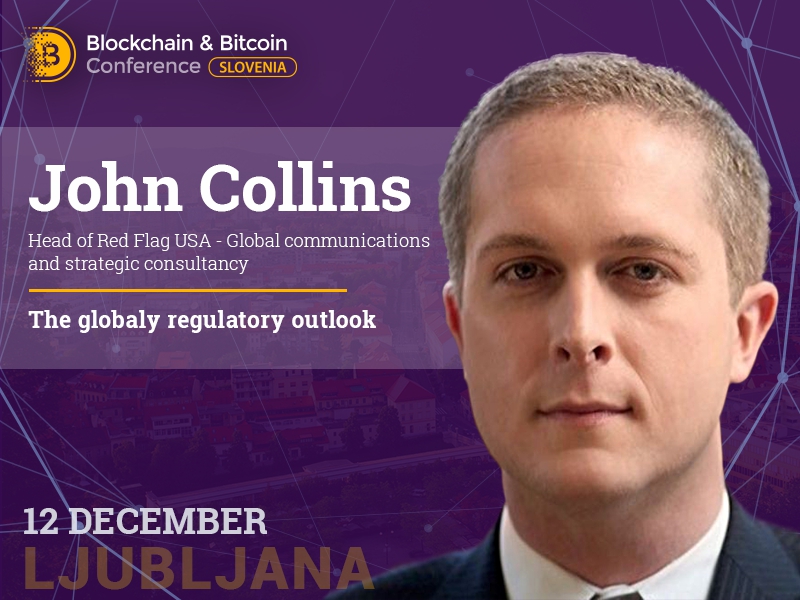 What are the prospects for the development of cryptocurrency and what should we expect in the near future? Head of Red Flag USA John Collins will share his opinion at Blockchain & Bitcoin Conference Slovenia.

John has a deep background in bitcoin and blockchain technology related public policy both in the U.S. and globally, leading the U.S. government's first work in the space in 2013 and subsequently serving as Head of Policy for Coinbase. He is working with a number of clients globally monitoring and helping shape responses to regulator concerns around such issues at digital currency exchange, ICOs, and other related issues.

Mr. Collins serves as Head of U.S. operations for Red Flag Consulting, a global strategic communications and consulting firm. Previously he worked as Head of Policy for Coinbase, the world's leading digital currency company and as a senior staffer in the United States Senate where he was lead investigator for digital currency issues on the Senate Homeland Security and Governmental Affairs Committee. Prior to Red Flag John Collins worked as Vice President of Policy at the American Bankers Association's international subsidiary. In addition, he serves as an affiliate with the Berkman Klein Center at Harvard University where he focuses on public policy issues related to financial technology, including digital currencies and blockchain.

John will discuss the global regulatory outlook and temperature around the various developments in the technology at Blockchain & Bitcoin Conference Slovenia.

What else will John Collins talk about at Blockchain & Bitcoin Conference Slovenia? Register to find out!